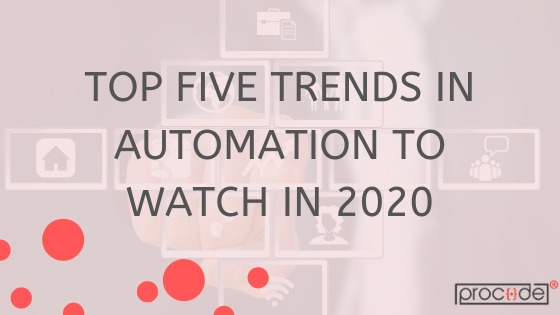 Automation is not new to the World. Wherever there was a new invention, automation was the next step humans ever thought of. The purpose of automation is to simplify tasks and achieve more in less time. When the industrial revolution took place, automation was focussed more on simplifying the repeated tasks which saved man-hours and improved efficiency. Today in the era of Information Technology revolution, it is no different.

With the digitalization of the World, the demand for automation has ever increased. From booking a railway ticket to opening a bank account to booking a taxi, everything is online. However, the world has not stopped at it. The focus is always on process improvisations and simplifications. Automation plays a key role when the optimization of processes is sought after.

The top Five Trends in Automation to watch for in the next few years are:

1.Industrial Automation: In the wake of the Industrial Internet of Things, many of the manufacturing industries have moved towards digitization and sensorization of their processes. To support industrial markets, many businesses are working on building affordable hardware for data capture. The next decade shall be focused on bridging the gap between Captured data and the additional value it can create in the industrial segment. The focus will be more on connected devices and Device-to-Device communication to automate industrial systems.

2.Robotic Process Automation: Robotic Process Automation in IT Enterprises was initially considered to be a threat to the huge man-hours put in by the Software Engineers. However, their adaptation into mainstream software segment has indeed shown an opposite trend. It has been reported that more than 5000 enterprises have adopted RPA to automate business process. These enterprises have hired more software engineers to automate the processes in the Software Industry.

Today Robotic Process Automation coupled with AI/ML serves in not only automating key processes in enterprises but also in driving the enterprise business transformation. A recent report in the BFS domain, at a leading American investment bank, showed how AI coupled RPA has helped in efficiently delivering projects at a faster pace.

As per the latest estimates published by Zinnov, RPA is set to transform business processes and workplace. Apart from Information Technology RPA is expected to be adopted by other industries like Telecom, Travels, and Hospitality. Gartner’s projection says that by 2022, more than 80% of the large to very large enterprises shall have implemented RPA in some area of the business.

3.Data Science Automation: Data Science, Machine Learning and Artificial Intelligence have been few top technologies which have seen much traction in the recent past. Analyzing a process use case, writing algorithms to tune the tasks to achieve a set objective have been on focus lately. Repeated fine-tuning is a challenge. Hence Enterprises are looking into automating these activities. A recent study shows that by 2020, automation will cover more than 40% of data science tasks.

Blockchain is seen as a secured ledger that validates and stores transactions on a distributed network based on a consensus mechanism between participating parties.

Automation and Blockchain have debuted in Financial Industry in the recent past. While automation is focused on taking care of the repetitive tasks, process execution, operational efficiency, Blockchain technology is focused on securing value exchange transactions and storing them. A hybrid usage of both technologies helps financial institutions make better business decisions.

5.Augmented Reality and Automation:
Augmented Reality and Virtual Reality have made tremendous progress in the service industry. Wearable technology is helping companies provide the best services to their clients by bringing an expert and support team on the same platform. While most of the technologies stated above leverage automation, here Automation is influenced by AR. Workforce automation in the services industry is seeing good traction in the recent past. AR is helping service providers by automating daily tasks and bringing in operational efficiency.

According to industry experts, every technology has its own set of repetitive tasks that should be taking place to achieve its defined objective. Automation acts as means to achieve the set objective quickly. Many pilots are on the way to test the hybrid technology approach and find a comprehensive solution to achieve business goals. While many technologies may emerge, Automation has a definite role to play.

Robotic Process Automation has been one of the topmost technology offerings that are keenly being focussed lately. A recent study by Deloitte shows that there has been a relative increase in the number of organizations that have come forward to investigate RPA and build a proof of concept around it. Results from these investigations, POCs have been positive and encouraging. Though the ROI is slow, technology experts can foresee the benefits of operational efficiency and process execution with the implementation of RPA.

Here are a few strategic choices that Industry experts should make to maximize the impact of RPA:

1. Lay a strong foundation for premium technology workforce.
2. Start with RPA in small business processes and expand it to automate bigger processes.
3. Focus on other operational benefits while cost reduction is just one of the benefits of RPA.
4. Build responsive and secure technical support. Majority of RPA implementations have been successful while working along with Third-Party partners who specialize in RPA.
5. Embrace the transformation that comes with RPA.

Implementation of RPA across an Enterprise appears like a big challenge. However, taking small steps to start with shall prove to benefit the organization in the long run.

All You Need To Know About Cost-benefit Analysis Of An Rpa Implementation
September 29, 2020
Cloud Migration Strategies
May 04, 2020
Choosing The Right Process For Robotic Process Automation
March 31, 2020